It took a perfect outing from one of the best lefties in baseball – including the first home run he ever hit in his life  – to mar what was otherwise an excellent opening series for the San Francisco Giants.

The Giants looked crisp off the mound and decent at the plate, hitting in rotation situationally and even manufacturing runs. The biggest issue at the plate is we are once again on pace to lead the league in hitting into double plays! But it’s early and that stuff will hopefully start to winnow out. Pitching – particularly Cain, Bumgarner and Romo – was stellar.

The Giants won the series 2-1 over their NL West division rivals the Los Angeles Dodgers to take an early season lead in what will likely be a fight for first place in the division with Arizona. The Diamondbacks made a statement in last night’s game – a scrappy, hard-fought, come-from-behind, 16-inning win over the St. Louis Cardinals to start their season 2-1 as well.

Starting pitchers did not allow a single earned run.

Cain was, typically, Big Horse consistent and stable. Bumgarner was intensely precise and Lincecum used balls and walks liberally, but stayed on top of his game.

Madison Bumgarner’s performance was platinum. He had tight, controlled movement and dominated the Dodger lineup. It was great to see from the young, powerful Big Country Mad Bum.

Bruce Bochy showed smart sensitivity pulling Cain in the first game. Cain and Lincecum are the eldest on our very young staff, and both got pulled before the 7th. This is how to develop middle and late relief and to protect starters’ arms over the long season.

Over the course of the last two years Bochy has slowly shown an increasing willingness to use the bullpen rather than risk fatigue – either of arms in the long term or of minds on the mound in the short term – with our starting pitching. This has culminated in the masterful use of a committee of late relief and closers last year down the stretch.

It’s important because our most significant problem (as pointed out most clearly by Bay City Ball) is depth at Starting Pitching. If one of our big 5 goes down, we’d have to adapt fast. 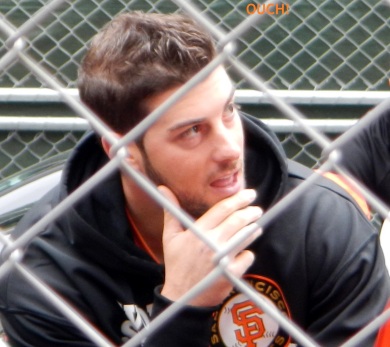 shake it off homes. freak swing by the opposing pitcher.

Before that Kontos had an excellent 7th inning and looked ready to work the middle and pass the ball over to one of our capable lefties before Romo. It was a shame it shook out like that. We believe in you George, it was a solid outing before the guy decided he wanted to make history in LA.

In a way George, we needed you to take that hit because a LOT of us really don’t want Matt Cain getting any more losses in tight games than he has to. The poor guy has suffered his entire career with win-loss records beleaguered by our inability to produce runs. You took those runs that night so Matty wouldn’t get them and the loss and we appreciate it.

Casilla’s wild pitch, Lincecum’s, others’ can be chalked up to the season being very young and we should be honest and expect more sloppy working it out in the first month or so.

In Casilla’s case especially, the guy is coming off winning the World Baseball Championship – The Dominicans ran the table! and he was overwrought and excellent in relief. (Haft has details on Casilla’s effort).

The guy has played more ball under pressure than most this year – Casilla gets a one month pass.

(DR vs. Japan would’ve been interesting)

Casilla’sWP:coming off winning the WBC,beating PR to do it,more ball under pressure than most this year – Casilla gets a one month pass.

Sergio Romo was SOLID GOLD. and he tweeted throughout including one which read that his “goal” was 50 saves! That was exciting to read.

Shutdown performance by Kershaw was followed by a solid job of hitting by the Giants in game 2, specifically by Joaquin Arias, but as YahooSports pointed out “The Giants scored their first run on three consecutive one-out hits, including Arias’ RBI single.”

Situational hitting and manufacturing runs was the story of the offense and this continued to game three when Crawford and Pagan joined in on the action. But the team added homers by Pablo and Pence! Thrilling stuff to see the offense coming together – power, contact, base-running (I’m excluding el caballero loco on that last one). Pagan leading off, Scutaro, Pablo and Posey behind him is going to work well.

The problem remains that too often the Giants destroyed opportunities by hitting into double plays. It is the beginning of the season and on any other team I wouldn’t bat an eye, but we have a historic problem that reaches back several years in this regard. Maybe bunt practice in order to take advantage of squeeze chances would help in other situations as well. If we aren’t going get a lot of hits, or score a lot of runs we have to at least keep runners on the paths and continue to manufacture runs as we have been doing the last year and change.

With Brandon Belt falling sick, Bochy had a chance to do more moving of the chess pieces. Arias on first and Sanchez behind the plate yielded and didn’t, had succeses and problems, but more I was happy to see this kind of constant moving about of players. I am of the mind we need a flexible team offensive scheme.

(Hec or Bus)ter at plate

Arias, Panda or Scutaro at third

Blanco or Torres in LF.

It’s flex-offense. I love Bochy for this team approach and have no problem with half a season going by with pieces moving in concert or individually to suit opponent, weather, interleague and etc. I have come around on this. Used to chew my nails to shreds over Bochy’s calls, now I see a logic in it. We can recreate units to suit. Cool.

Hunter Pence still looks like a crazy-eyed wild man going after balls. I trust him … and yet … it makes me nuts to see Pence and Pagan still doing the chipmunk act from the old Looney Tunes cartoons .. “After you.” “No, After You. “No I insist.” (ball drops to the field). I know Pence has only been out there a few months for us, but he and Pagan have to work that out because problems we saw last year continue. Pagan manhandled CF again. LF hardly saw any action at all so the platoon was untested.

All told an excellent series for the Giants and a great way to launch Giants Baseball Corner. I will be posting Series Wrap-ups like this whether I post full series game for game or not. Feel free to comment, feedback etc. best is on TWITTER, in my opinion.

Sorry to everybody but particularly to Julian for over tweeting while getting GBC set up.

All are welcome here where we are focused on the relentless flow of the positive river.